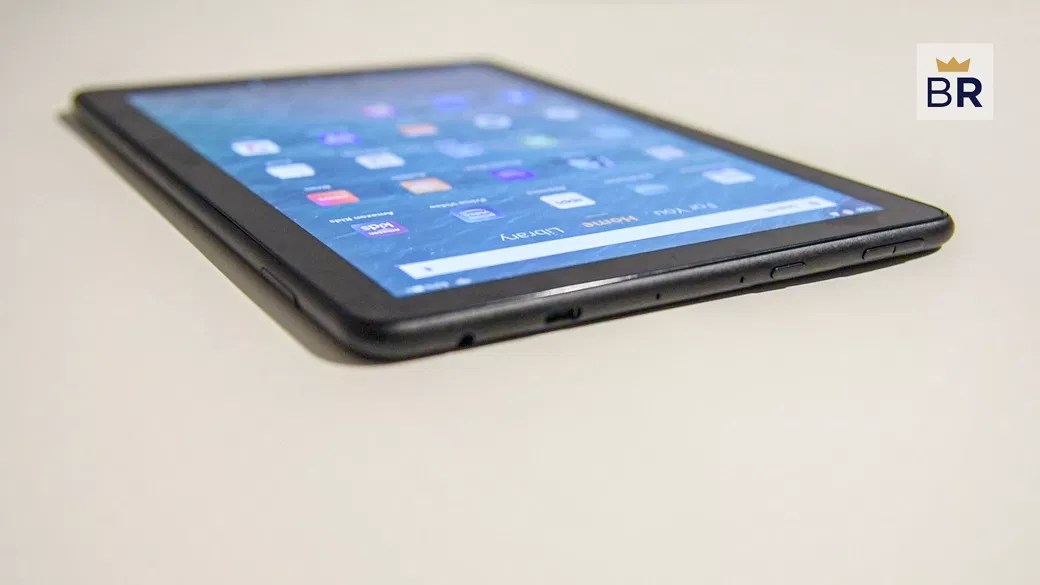 Whether you’re working, streaming, shopping, or entertaining your home, a tablet can do it all. However, these devices can easily cost hundreds of dollars, and the accessibility and functionality of their features can vary.

Amazon Fire tablets are built on an Android operating system with an interface revolving around Amazon services. Fire tablets are ideal for anyone on a budget, as they cost a fraction of what you would pay for a competing brand’s tablet. The Amazon Fire HD 10, for example, has a large, high-definition display and enough storage and processing power for all your favorite tablet tasks, all for less than $200.

We wanted to know how this budget tablet would perform in a competitive market, so we tested the Amazon Fire HD 10 tablet. Here’s what we learned.

We worked the 32GB Fire 10 tablet into our routine for two weeks, using it for a variety of tasks like streaming video, scrolling through social media, and reading.

Amazon tablets like the Fire HD 10 are similar to Samsung tablets in that they are powered by Android. However, Amazon Fire tablets streamline user access to Alexa and Amazon apps such as Kindle, Amazon Music, and Prime Video. The base Fire HD 10 model costs less than $200 and comes with Amazon-specific apps, plus a 10.1-inch 1080p high-definition display that’s great for streaming or reading picture books or magazines. Other Amazon Fire tablet models are 7 or 8 inches, but this new 10-inch tablet is better for watching video and reading colorful, graphic-rich media like comic books.

How to Use the Fire HD 10 Tablet

The Fire 10 tablet is easy to set up and use. We noticed that it was easier to install than a new cell phone. Although Fire tablets are Android tablets, they use a unique Android operating system called Fire OS, so they don’t have quite the same interface as other Android devices. However, whether you’re used to Android’s operating system or another tablet operating system, we found the Fire 10 easy to navigate.

The Fire 10 is smaller, lighter and faster than its predecessors. It has a powerful octa-core processor and 3GB of RAM, 50% more than the last generation of Amazon tablets. They also come with a choice of 32 or 64 GB of storage. Native apps include Prime Video, Kindle, Audible, and a few news apps, and third-party apps like Pinterest, Netflix, Hulu, and Overdrive are available for download from the Amazon Appstore.

The tablet’s rugged shell is made from 28% post-consumer recycled plastic and is available in four colors. The 10.1-inch screen is made with reinforced aluminosilicate glass, which makes it stronger and more durable than competitive models. With its available features and sturdy build, especially in the Fire 10 Kids Edition, we think it’s one of the best kids tablets you can choose.

The Fire HD 10 with 32GB of storage and ad-supported lock screens costs $149.99, but Amazon also offers a version that removes lock screen ads by default for $164.99. The Fire 10 comes with a USB-C charging cable and a 9V power adapter. Packs with a case and screen protector, or productivity tools like a Bluetooth keyboard, are also available.

Where is the Fire HD 10 tablet sold?

The Fire 10 tablet is sold exclusively through Amazon.

Should you get the Fire HD 10 tablet?

Advantages of the Fire HD 10 tablet

The Fire 10 tablet has an impressive battery life, lasting up to 10 hours without recharging. For the amount of time we spent on Fire 10 each day, that meant we didn’t need to plug it in for almost a full week. We were also impressed with the video streaming quality and crisp color contrasts. Even though we had to download many of our daily apps, there was enough storage and processing power in the Fire 10 that performance never slowed down. Overall, our experience with the Fire 10 left us happy with its reliability and solid build.

Disadvantages of the Fire HD 10 tablet

As an Amazon tablet, you’re limited to Amazon content on the Fire 10 to some degree. The Fire tablet does not support the Google Play Store or Google-owned apps. If you’re already an Amazon shopper, Prime Video watcher, and Alexa user, integrating the Fire 10 into your routine will be easy and convenient. If you’re used to Apple or Google-specific apps, you might be frustrated with Amazon’s lack of access to those stores and their content.

We encountered a few functionality setbacks when testing the Fire HD 10. For example, we found that the tablet’s split-screen mode wasn’t very intuitive to set up, which slowed app performance while in use. . The Fire 10’s built-in audio wasn’t all that impressive, but we do appreciate the ability to use both Bluetooth and wired headphones. Finally, the constant presence of Amazon ads, or the added cost to avoid them, could be off-putting to someone new to Amazon tablets.

For an Amazon kids tablet, the Fire 10 is a good choice thanks to its low cost and fairly sturdy build, but the Fire HD 8 Kids Edition offers additional features for parents’ peace of mind at an even lower price. . Limit your child’s access to apps and games, or add a curfew to schedule screen time. Kids Edition Fire tablets also come with a durable case and a one-year subscription to the Amazon Kids+ service, which offers over 20,000 books, apps, games, children’s songs and more.

This popular Amazon tablet has a smaller 8-inch screen, making it lighter and more portable than the Fire 10. It’s great for streaming or as an e-reader. It has the same storage configuration options as the Fire 10 and a 2.0 Ghz quad-core processor.

If you need more productivity features on your tablet, consider this Samsung model, which has a large 12.4-inch AMOLED display, 14-hour battery, and up to 512GB of storage. It also comes with a USB-C cable, adapter, and stylus. However, its additional features come with a higher price tag.

Sign up here to receive the weekly BestReviews newsletter for helpful tips on new products and great deals.

Laura Duerr writes for BestReviews. BestReviews has helped millions of consumers simplify their buying decisions, saving them time and money.