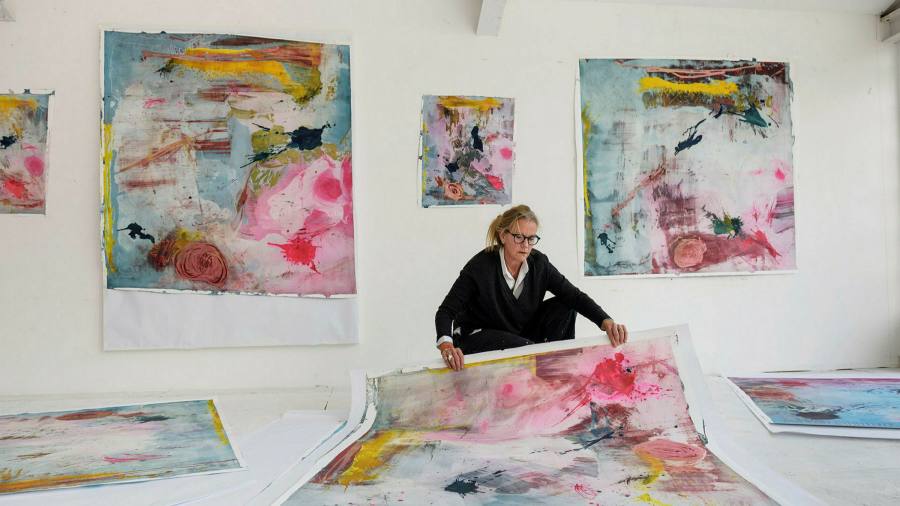 This may seem like the status quo in the post-pandemic Western art world, but some of the alternative models initiated during the lockdowns are finding their place. One is the Fair Art Fair (FAF), an app launched last September by London-based artist and gallery owner Stacie McCormick, with support from the Arts Council. Despite its name, the platform operates more like a gallery than a fair, but certainly lives up to its adjective. All subscribers – whether artists, buyers or curators – pay the same fee (£19.99 per month) to join what McCormick describes as a “peer-to-peer community”. Artists do not pay a commission on their sales, traditionally around 50%.

McCormick cites data from 2020 which shows there were 55,000 visual artists in the UK but only 1,400 commercial galleries. “Most of these artists deserve to be seen. But they leave their masters [degrees] and join a completely rigged lottery,” she says. At the same time, “many people want to live with art but don’t know how”. Its digital strategy aligns with the latest Hiscox e-commerce report, which found that 84% of art buyers believe the market pivot to digital is permanent, up from 51% in 2020.

It’s the beginning. FAF’s subscribers — mostly artists — number around 300, but the app has been downloaded by more than 7,000 people, McCormick says. She is experimenting with a hybrid format and is opening a second IRL exhibition next week at her Unit 1 gallery, still commission-free on sales. “Curated II Womxn” features 20 artists chosen in the app by Jo Baring and Beth Greenacre (May 6-June 11).

The London Art Fair postponed this year (April 21-24), which clashed with the opening of the revamped Venice Biennale, lost a few figures to Italy, but otherwise had limited impact. These events draw different crowds – glittering globetrotters head to Venice while LAF has a loyal local crowd – but both focus on female performers.

LAF’s partner museum was The Women’s Art Collection, owned by Murray Edwards College, Cambridge, which featured works by Paula Rego, Tracey Emin and Linder. The collection of 500 works was also purchased at the fair, including Tiffanie Delune’s ‘No More Battlefields, Only Flowers’ (2021, £3,850, Ed Cross Fine Art). The Cynthia Corbett Gallery has brought in only female artists, ranging from fast-selling ceramics by 30-year-old Freya Bramble-Carter (from £675) to an oil painting by octogenarian Tuëma Pattie (4 £000).

“There are more women collectors now, which is helping to change the market,” said gallerist Tanya Baxter. Its highlight of the sale was, however, courtesy of a male artist – Andy Warhol’s 1985 serigraph of Queen Elizabeth II sold for £315,000 at Showpiece, a recent entrant to the growing market for fractional ownership.

A golden candy box that was stolen in 2003 resurfaced and was identified by the Art Loss Register (ALR). The 18th century circular box, which is just 9cm in diameter and bears the portrait of a woman on its lid, was one of more than 100 gold boxes stolen from Waddesdon Manor, an English stately home built by the Rothschild banking family, by a band of masked men. At the time, the total transport, which included other items, was estimated at £8million. Most parts are still missing.

The Paris-made bonbonniere, originally bought by Alice de Rothschild (1847-1922), reappeared at a UK regional auction house last year and – before its provenance was known – had an estimate of £2,000-2,500. Lucy O’Meara, recovery specialist at ALR, says it’s “surprisingly common for a [stolen] object to appear at auction later, having often been bought in good faith”. The returned box was put on display again in Waddesdon, now a National Trust property, on Wednesday.

It’s been three years to come, but this week marks the postponed 2020 in-person edition of the Art Brussels fair (Tour & Taxis, April 28-May 1). “It’s a big moment, but it’s not a reinvention, we’ve stayed true to our format,” says managing director Anne Vierstraete.

Founded in 1968 and one of the oldest contemporary fairs on the circuit, Art Brussels tends to be an attractive event, helped by a long-standing prize of €10,000 for a single artist stand. Highlights from this year include the work of Hermann Nitsch, who died earlier this month (Galerie RX), and Noel W Anderson’s basketball warping tapestries (Zidoun-Bossuyt, $25,000-$55,000). Several galleries in the invitation section have chosen to show Ukrainian artists, including Lesia Khomenko (Fridman Gallery) and Victoria Pidust (Office Impart).

For its next edition in April 2023, the show is moving from the exposed brick location of Tour & Taxis, where it has been since 2016, to Brussels Expo. In another move, Vierstraete will step down in July to become an adviser to Easyfairs, owner of Art Brussels and Art Antwerp, handing over to gallery relations director Nele Verhaeren.

An engraved and gilded helmet from around 1560 set an auction record for a piece of armor this month when it sold for €540,000 (€690,000 with fees, estimated €40,000-€60,000) at Thierry de Maigret in Paris. It was purchased by London specialist Peter Finer whose research revealed it had been commissioned as part of four complete sets by Emperor Ferdinand I for himself and his three sons to wear at a tournament in Vienna. A similar helmet with the same story is in the Wallace Collection in London, he notes.

The arms and armor market has “loyal and established collectors who have been buying from us for decades,” says Finer. Although the past two years “have not been easy,” some museum sales have still taken place during the pandemic, he says. The “probable final destination of his last helmet could well be a museum”.