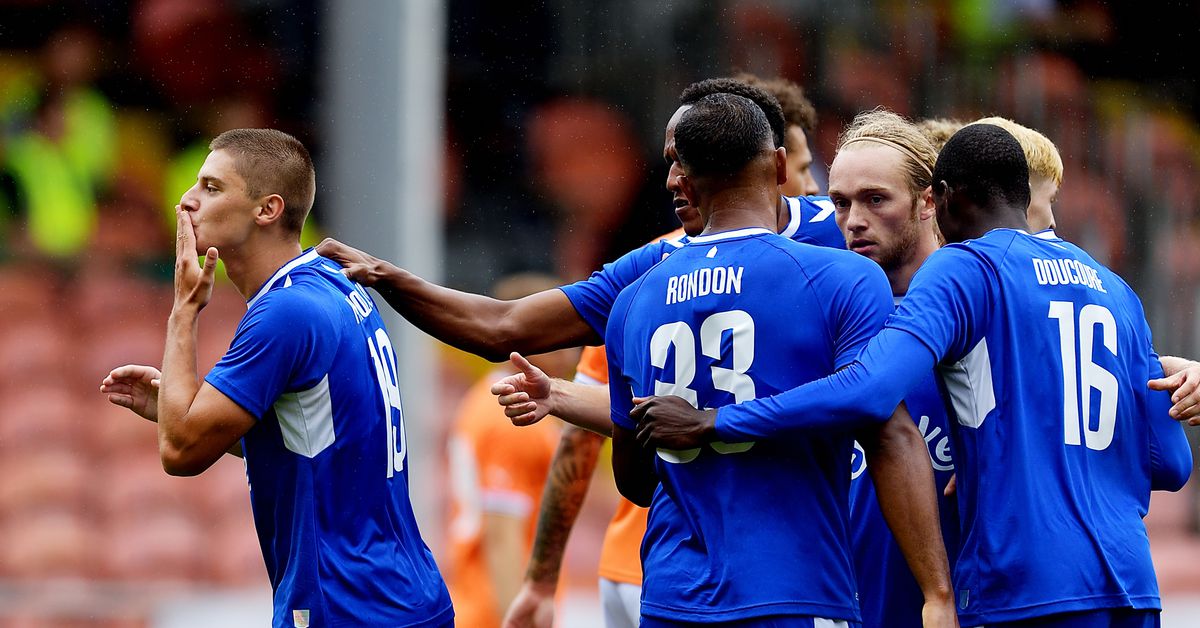 87 ‘ – The ball falls gently for Fiorini and, the gaping goal, he dismisses it.

80′ – Five changes for the Blues in all – Warrington, Welch, Price, Mills and Dobbin all arrive, with Patterson, Doucoure, Tarkowski, Gordon and Dele leaving.

72′ – A change in the middle now as Davies walks away with Allan arriving.

67′ – A rare mistake by Tarkowski gives Blackpool a chance. He gets caught with the ball on the edge of the area and commits a foul. It’s Garbutt’s perfect range, he gets it over the wall but can’t dive under the bar.

64′ – Dele again!! Nice interaction between Gordon and Iwobi on the right, and Patterson’s cross into the box is met by Dele, and he hits from a tight angle, 4-2 now.

61′ – Change for the Blues with Alex Iwobi who has just replaced Rondon. Who will play the striker, Dele or Gordon?
Immediately in action as Gordon’s cross into the box is met by Iwobi but it’s not good contact and wanders off.

57 ‘ – New corner for the Seasiders, fizzed in the box by Garbutt and Everton are relieved.

55′ – Blackpool win another corner, fall over Bowler and a terrific long corner shot from the former Everton Under-23, Pickford do it better this time parrying for a corner.
Bowler earns another corner on the right as Myko stops him. Garbutt to take, blanched.

53′ – Another fantastic through ball from Tarkowski to Myko, but his cross fails to find Gordon in the box.
Dele was unhappy with a tackle Connolly made on him, and is now booked for a petulant late challenge on the player.

50′ – Phew, Everton cash in again, and again from a set piece! The hosts win a corner on the right, it’s in the box and another former Blue Callum Connolly comes in behind Rondon and heads in from close range, no chance Pickford. 3-2 for the Blues now.

47′ – Dele scores, brings the score to 3-1 at the start of the game!! Make no mistake about it one meter this time!! Patterson plays Holgate making a deep run, his cross is missed by Rondon, the goalkeeper parries it, he drops to Myko from a very tight angle and he crosses it for Dele who taps in just a yard away.

46′ – Second half in progress, will notify you of lineup changes in a second. Keane and Holgate replace Mina and Godfrey.

45 ‘ – Whistle at half-time, the Blues lead 2-1. The first two goals killed it off like a contest, but then the Blues made a crucial late-half error which unfortunately wakes up the game.

44′ – Oof, error by Pickford and that allows the hosts to withdraw a goal. Another former Blue Josh Bowler cuts from the right and shoots, Pickford parries him but doesn’t get much and he falls very nicely for Madine on the goal line and he nods, 2-1.

42′ – Everton play the ball from the back but Dele throws a bad pass through the middle just outside the box and Patterson has to foul which awards a free-kick.
Former Blue Luke Garbutt feels like it, but Pickford doesn’t mind.

38′ – Tarkowski with another lovely through ball sees Rondon drive away down the left, but he goes too far and his shot from a tight angle is blocked for a corner.

30′ – Good run from Dele there as he passes first then the other but fails to nutmeg well and runs into another defender.

26 ‘ – Big swinging center from Patterson now, and Blackpool jostles, comes out for a corner. Taken aback, and the Blues once again fail to put the ball back in the box.

23′ – A rare foray forward from Blackpool, and Fiorini has the chance to fire from the edge of the box, straight at Pickford and he collects.

14′ – Gordon hits his man and enters the box, the defender goes over then also pulls Gordon down, but the referee calls a foul from the Everton player.

10′ – Goal Davies!! A delicious long ball from Godfrey finds Rondon in all sorts of space, he runs down to the goal line with it and a perfect cross into the six yard box is met with another excellent finish, this time Davies smoking into the surface. 2-0 for the Blues.
Reminder – there is no VAR today, as watching the replay Rondon was definitely offside when that ball from Godfrey was played over.

9′ – Everton do a good job of controlling the ball, passing it from behind and mixing long and short passes.

6′ – Goal by Myko!! Tarks’ long diagonal frees Patterson on the right, Gordon sends it back to him and the Scot’s cross into the box is fantastic, but Myko’s late run into the box is even better and his finish tucks into the deepest corner distant. Beautiful football, 1-0 to the Blues.

4′ – Myko does a great job of shooting a long diagonal from Godfrey across the baseline, cuts to shoot with his weaker right foot and it’s straight at the keeper.

3′ – It’s Godfrey on the right, Mina in the middle and Tarkowski on the left who form the last three. Davies and Doucoure are in the middle, with Patterson and Mykolenko on the flanks, then it’s Gordon and Dele behind Rondon at the top.

The chatter from the Everton comment stream is that Dominic Calvert-Lewin is being dropped from this game as a precaution.

Strange to say, but the pressure is already mounting on Everton and Lampard to put in a decent performance today. The coach chose to go up to three today.

Let’s just say Everton’s pre-season hasn’t gone in a way that will reassure fans that the Blues aren’t ready for a relegation battle this season. Manager Frank Lampard is frustrated that the players he has been promised have yet to materialize, and in the first two friendlies the team he has quickly show they refuse to learn from their mistakes from the start. last season.

We have yet to see what the Blues have been working on, but as we go down in level from game to game this summer, we will have a better idea of ​​the level than this Everton side. plans to operate during this campaign. We looked outclassed against Premier League opposition Arsenal, MLS side Minnesota United continued to humiliate us and now we’re playing a Championship side to see if we can finally dictate the pace of a game and enjoy scoring opportunities while keeping the ball out of our own net.

Blackpool finished 16th in the English second tier last season, having been promoted the previous year from League One with a key contribution from Everton youngster Ellis Simms who spent the season on loan with them. Former Toffees Callum Connolly, Shayne Lavery, Josh Bowler and Luke Garbutt are also in their ranks.

*Royal Blue Mersey has affiliate partnerships and may earn commissions for products purchased through the affiliate links provided.

The Blues have already faced the Seasiders in a recent pre-season friendly with the two teams battling to an entertaining 3-3 draw in August 2020 ahead of the start of the 2020-21 season. The hosts had taken a three-goal lead in Carlo Ancelotti’s first summer in charge in just eleven minutes, but the Blues were able to fend off that embarrassment with a Dominic Calvert-Lewin goal and a Gylfi Sigurdsson brace to resell. their blushes.