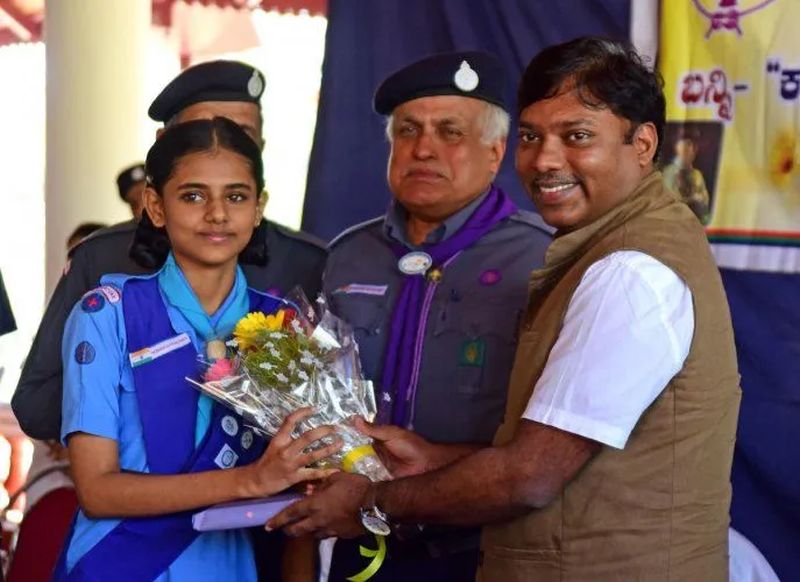 Gem of a person, friendly and darling of schoolchildren, ex-DC Sasikanth Senthil talks about ‘HIJAB’

Gem of a person, friendly to people and darling of schoolchildren Former Deputy Commissioner of Dakshina Kannada/Mangaluru S. Sasikanth Senthil talks about ongoing issues regarding ‘HIJAB’

During his tenure as DC, he was highly regarded and appreciated for his honest duties by good and educated people, but was hated by corrupt politicians and government authorities because he was honest and strict in following the rules. One thing is sure in Dakshina Kannada/Mangaluru, good and honest government officers will not last long, because of the games and politics played by Netas. For example, Commissioner of Mangaluru City Corporation, Hephsiba Korlapathi, who took charge on January 1, 2015, of many councilors who opposed her for her strict nature, very disciplined in her work and who showed great interest in the city ​​development works. Her over-disciplined nature was seen as a threat by some of them, and they transferred her within five months of taking office.

Having earned the “DARLING OF SCHOOL CHILDREN” label, former DC Sasikanth Senthil, had been ruthless against lawbreakers while demonstrating utmost professionalism in handling natural calamities during his nearly two-year stay at Dakshina Kannada. Even though the rains stopped once the holiday was declared, his intention not to put children’s lives at risk, expecting bodies of water to swell during downpours, was hailed. And due to his action in declaring a rain vacation, on the lighter side of the vein, there were quite a few funny WhatsApp messages mocking him, but DC took them as funny and cared less about the messages.

DC Senthil was Non-Corrupt & Ruthless with Law Breakers! Here’s what citizens have to say

S. Sasikanth Senthil came into the limelight after resigning from the services of IAS on September 6, 2019 out of dissatisfaction with the actions of the central government led by the Bharatiya Janata Party (BJP). His resignation letter said the fundamental elements of democracy are being violated in an unprecedented way. Sasikanth was also renowned for handling communal disputes and controlling the sand mafia in Dakshina Kannada district where he worked as a deputy commissioner. The bureaucrat said it was “unethical” of him to continue as a public servant when “the fundamentals of diverse democracy are compromised”. “I am also convinced that the days ahead will present extremely difficult challenges to the basic fabric of our nation and that I would do better outside of the IAS to continue my work to improve the lives of all,” Senthil said in the letter.

He also apologized to public officials and neighborhood residents for quitting his job halfway. In February 2020, he said he had resigned from the IAS post for the BJP’s fascist and anti-people activities. Sasikanth made a name for himself for being a government official during his years as a civil servant in Dakshina Kannada district and was praised by his peers for his administrative fairness. He said his administration had succeeded in reducing the funds provided to religious extremist organizations and that this was accomplished by limiting illegal sand mining and sand from the district since the two are linked. He also said his leadership has had discussions with members of various religious communities.

There were 42 cases and 6 cases of communal violence in Dakshina Kannada in 2017, according to statistics. It fell to 3 cases and 3 instances in 2018. He was credited with controlling the district’s illegal sand mafia that had nearly ruined the delicate environment of the Coastal Regulation Zone (CRZ). Senthil had reduced the number of permits for sand mining in rivers in the Coastal Regulation Zone from over 400 to 90 during his 2 years in the district. Sasikanth introduced a platform and app in May 2019 to encourage transparency in sand mining, thereby limiting illegal logging. The management made it mandatory that all sand mined from CRZs be distributed only through the rig, which effectively destroyed the illegal export of sand to other states. The platform was such a triumph that the neighboring district of Udupi also adopted the initiative.

Bharatiya Janata Party (BJP) leader Anant Kumar Hegde called his resignation an act of arrogance. He also called him a traitor and asked him to go to Pakistan. Jignesh Mevani, the MLA for Vadgam Assembly constituency in Gujarat, said in a tweet that “history will remember that some brave among us decided to stand up as everyone was asked world to crawl Congress MLC, Ivan D’Souza and party supporters staged a protest outside the deputy commissioner’s office in Mangaluru Protesters held the BJP responsible for Senthil’s resignation He also demanded a The villagers of Sasikanth’s home village staged protests not to resign from his post, he also built a library in his village and helped many students to get an education.

Sasikanth had called the ruling BJP government a “fascist government” and that fascism is coming to India and there is a general feeling among the officers that things are really not right. He also said the Kashmir scenario was part of a “fascist framework” being implemented in the country and said the month-long state crackdown was unprecedented. He had also blamed the Rashtriya Swayamsevak Sangh (RSS) and the BJP for a divisive policy. Highlighting the attacks on Jawaharlal Nehru University in 2020, Sasikanth had said that Jawaharlal Nehru University is a leading university that educates children from poor backgrounds and that is why they have raised the hostel fees from Rs 30 to Rs 3000. He also said that the BJP government wants to shut down all universities and other centers of higher education that produce rational students who would challenge the irrational initiatives of the party. Sasikanth also said that their program is completely against the interests of various working communities, especially the Dalit community and other oppressed people.

On a final note, on the transfer of the former MCC commissioner within five months of taking office and then the resignation of DC Sasikanth Senthil within two years, it seems that Mangaluru does not want to keep good, strict and honest government officials, to rule the city – either they get transferred for doing honest and corrupt free work or they resign after getting fed up with too much patronage and interference from corrupt and stupid politicians. It is regrettable and sad to see that good and caring citizens of Mangaluru who had high hopes in this young and intelligent Deputy Commissioner, where the City would have progressed better during his tenure, found themselves with their hopes completely shattered, in due to the unexpected decision made by DC. Much would have been accomplished under Senthil’s leadership, which no other former DC would be able to achieve – but all good citizens’ hopes were in vain – Mangaluru lacked an honest, strict and disciplinary Deputy Commissioner – and who was a FRIEND to all, rather than a DEPUTY COMMISSIONER!

Now, while there has been unrest and chaos regarding the Hijab row, former Dakshina Kannada DC Senthil has released his thoughtfully put powerful and motivational words of wisdom on Youtube which have gone viral on social media and have been viewed and completed by millions. WATCH BELOW –