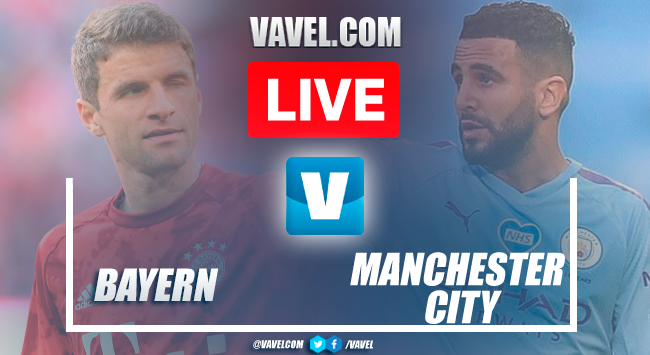 It was a close call!
The post saves Bayern after a very good shot from the youngster, but Manchester City more so, Bayern stretched defensively. But no danger for the goal of the Sky blues.

The second goal does not arrive!
Grealish and Álvarez could not score, the goal resists. Guardiola analyzes his team’s other moves.

The revolution of changes is coming!
Too many changes are in the works for Bayern, where the starting XI is changed from minute 1. Similarly, Manchester City have changed most of their lines.

Almost the second!
Kevin De Bruyne makes a good combination with Mahrez, but fails to complete the move and the sky blues get closer to the second goal than Bayern to the first.

They hit him with everything they got!
Grealish is treated on the pitch, after strong arrivals to the England winger.

They keep knocking on goal!
Manchester City with Alvarez close to scoring his second of the afternoon, but it’s a long shot.

Almost the second! There is a rebound from Erling Haaland’s shot, which could have been his second goal in a City shirt.

He had it!
Rodri almost scored the goal that would earn City two goals, but it was a poor finish.

After the rain, the Bayern players return to the pitch for some stretching.

It was not a goal!
Bayern had it, Gnabry scores the goal, but it was disallowed.

It was a close call!
Kevin De Bruyne shoots and the ball goes wide of the goal. Once again City are on the doorstep of Bayern, now Grealish tries but he just misses Neuer’s goal.

The ball rolls at Lambeau Field

This sporting rivalry between the Sky Blues and the Bavarians was initiated by friendly matches or in the Champions League. But the most recent was in the same friendly match in the United States, winning Manchester City by three goals to two, this in 2018, in the International Champions Cup tournament.

Manchester City and Bayern are both scouting the pitch, starting the warm-up moves, in a few moments we’ll share with you the possible line-ups for this friendly match.

They have already arrived

We’re back for minute-by-minute coverage of Bayern v Manchester City. We will share with you the confirmed rosters shortly, along with relevant facts about the clash between these two teams.

Tune in here Bayern vs Manchester City in the live score

In a few moments, we will share with you the Bayern vs Manchester City live matches, as well as the latest information from the Lambeu Field Stadium, such as player statements and some interesting facts about this great game between these two great clubs.

What time is Bayern vs Manchester City for the friendly match?

How to watch Bayern vs Manchester City live and online?

Watch out for this Manchester City player

Watch out for this Bayern player

The final composition of Bayern

No end to surprises

Welcome to VAVEL.com’s coverage of the 2022 Bayern vs Manchester City Friendly LiveUpdates!

My name is Mauricio Gonzalez and I will be your host for this game. We’ll provide you with pre-game analysis, score updates and live news right here on VAVEL.

Arsenal vs Chelsea FC live stream: How to watch a FREE pre-season friendly in the UK tonight