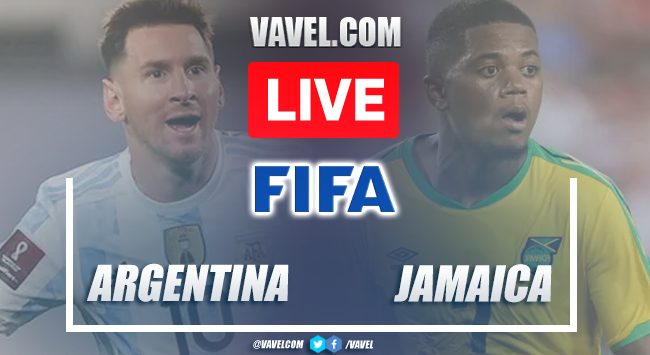 The match is over, Argentina defeats Jamaica.

Goal, goal, goal for Argentina! Messi comes back and scores from a free kick.

Goal, goal, goal for Argentina! Messi took the ball, drove and sent a deadly shot to increase the lead.

Powerful blow that ends up in the hands of Blake.

Changes in Argentina. Correa, Martínez and Molina are replaced by Álvarez, Di María and Montiel.

Argentina, led by Messi, were looking for the second, but couldn’t generate much danger.

Lo Celso looked to generate danger, but the visiting defense prevented the arrival.

Changes in Argentina. Hernandez and Messi are replaced by Rodriguez and Martinez.

Argentina came in with danger, but Jamaica multiplied and ended up keeping the ball away from their area.

Halftime in New Jersey, Argentina momentarily wins by the minimum.

Argentina looks to generate danger, but fails to define properly for the second.

Jamaica try to generate danger but can’t get past the midfield.

Cross from Tagliafico, but the ball ends up being deflected.

Blake ends up holding the cross with no problem.

Shot from Lo Celso, but ends up being deflected by the Jamaican defense.

Goal, goal, goal for Argentina! Alvarez received the ball in the middle of the box and scored to open the scoring.

The game started quite lively with Argentina looking for the opposing goal.

Argentina and Jamaica kick off the game.

Both teams are already on the pitch ready to warm up before the start of the match.

Jamaica are already at the stadium, they will pull out all the stops to complete the complicated task of defeating Argentina.

Jamaica comes after a painful loss against Peru, so they will be looking for a good game against Argentina.

Lionel Messi won’t start the game, the striker will start on the substitutes’ bench while waiting for a chance from Scaloni.

Argentina arrive having accumulated 8 goals in their last two games, so they will go all out to score more goals.

Argentina is trying to prepare for the World Cup, which is just around the corner.

The Mexican Marco Ortiz will be the referee of this important friendly match between La Scaloneta and Jamaica.

We’re back for minute-by-minute coverage of the Argentina-Jamaica game. We will soon share with you the most relevant information, as well as the confirmed line-ups.

In a few moments, we’ll share with you the starting line-ups for Argentina vs Jamaica live, as well as the latest information from the Red Bulls Arena stadium. Stay tuned for up-to-the-minute live coverage of the match on VAVEL.

Where and how to watch Argentina vs Jamaica live stream online

What time is the Argentina vs Jamaica game of the FIFA friendly match?

Lionel Scaloni spoke before the match: “The truth is that Mexico are a great team. I have no doubt that they are one of the best teams in the World Cup and that they will make things very difficult. It will be complicated. opponent”.

“Romero’s situation really bothers me because I would like to have him here and he’s stuck in Argentina with the visa problem and can’t travel. It’s a real problem because it’s the last date on which we have to get together and train and we won’ I can’t have him. Lisandro arrived early this morning, we’ll see how he is, and I would like him to be able to play if he’s fit. I haven’t been able to talk to him yet, but if he’s fit he will surely play. I have to talk and define everything.”

“This team has shown that it doesn’t matter who plays, in the end the team doesn’t play any other way. We know what we are playing for, so beyond the names we will play the same way. Yes, we have a team that slipped from memory, but tomorrow we’ll probably make some changes to give some guys a chance, but the bulk of the team will still be there, and we know whoever comes in will be fine.”

“When it was my turn as a player I had to play an FA Cup final when I was practically on the list, and when a player is on the pitch he thinks of nothing but the game. Otherwise, you don’t come out mentally, and I think you have to take that nervousness away a bit. Yes, it’s a World Cup, something very important, everyone’s dream, but you have to get to the better conditions, and for that you have to have a minimum of continuity in the club, I don’t think it’s worth wondering if you get injured or not, you have to play and be available for the club coach team, and then thinking and being positive that everything will be fine.”

“Everyone who is called up has a chance to play, we already had him with us in a previous call-up. We appreciate that he can get his chance. He’s here, in the squad, he’s a player who can bring things to us, as well as to Exequiel Palacios, who could not come due to injury. We will see when the time comes to decide, but the important thing is that we have good players. We will see what what will happen.

The game will be played at Red Bulls Arena Stadium.

The Argentina vs Jamaica game will be played at Red Bulls Arena, located in New York, United States. The stadium has a capacity of 25,000 people.

Welcome to VAVEL.com’s coverage of the Friendly Match 2022: Argentina vs Jamaica Live Updates!