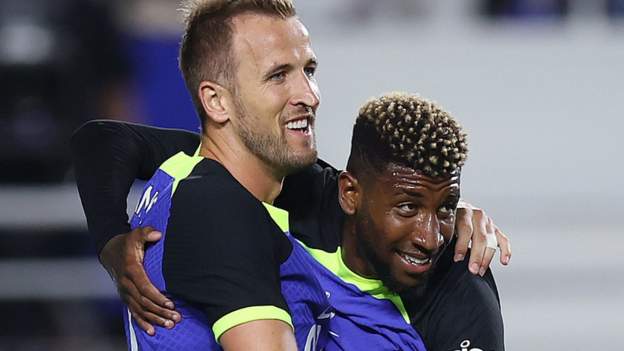 Spurs ended their South Korean pre-season tour with a 1-1 draw against Spanish side Sevilla in Suwon.

Harry Kane fired home five minutes into the second half after excellent footwork saw Son Heung-min beat his man at the edge of the 18-yard box before setting up for Kane who was coming in the opposite direction.

Kane had seen a goal ruled out for offside in the first half of the game.

But Tottenham walked away with a draw after Sevilla midfielder Ivan Rakitic scored with a powerful strike from outside the box.

“This week in Korea I’m very happy because we worked a lot and at the same time we enjoyed and played two friendlies,” Spurs coach Antonio Conte said.

“I think the first game was friendly and this one was a real game.”

Spurs will return to England with some injury concerns after Ben Davies was taken off in the 85th minute.

Conte added: “He finished the game with a bit of ankle pain. Hopefully nothing serious.”

They will travel to Ibrox to face Rangers next weekend as they continue to prepare for the new campaign.

Conte said he hoped to give new signing Ivan Perisic “20 to 30 minutes” in this game.

Perisic is yet to feature for Tottenham after picking up a leg injury in his last game at Inter Milan.

Fulham, the only winner of the Premier League on Saturday

Newly promoted Fulham triumphed 2-0 over OGC Nice in Portugal and were the only English side to win on Saturday.

Neeskens Kebano passed the keeper a few minutes before the break to give his side the lead.

Harry Wilson added the second when he converted from the penalty spot in the 84th minute.

London colleagues Brentford lost the first of their pre-season games in Germany 2-1 against VfB Stuttgart.

Bryan Mbeumo scored the opener in the first half but the German side equalized through Thomas Kastanaras before Tanguy Coulibaly netted a late penalty to put his side ahead.

They have games left against Strasbourg and Wolfsburg before hosting Real Betis in London at the end of the month.

Kiernan Dewsbury-Hall, Patson Daka and Jamie Vardy were all on the scoresheet and the Foxes gave 26 players time on the field during the game.

West Hammeanwhile, were held 1-1 by Reading.

Nikola Vlasic scored on his return home from international duty but the Royals responded with a Yakou Meite goal.

Meite thought he had snatched a victory from Reading, but his goal was disallowed for offside.

There were concerns when goalkeeper Dean Henderson had to be substituted, but Steve Cooper confirmed he was uninjured.

“It was a precaution,” Cooper said. “It was a very heavy week physically, including for the goalkeepers.

“He’s not injured, he’s fine. He just felt his groin a bit.”