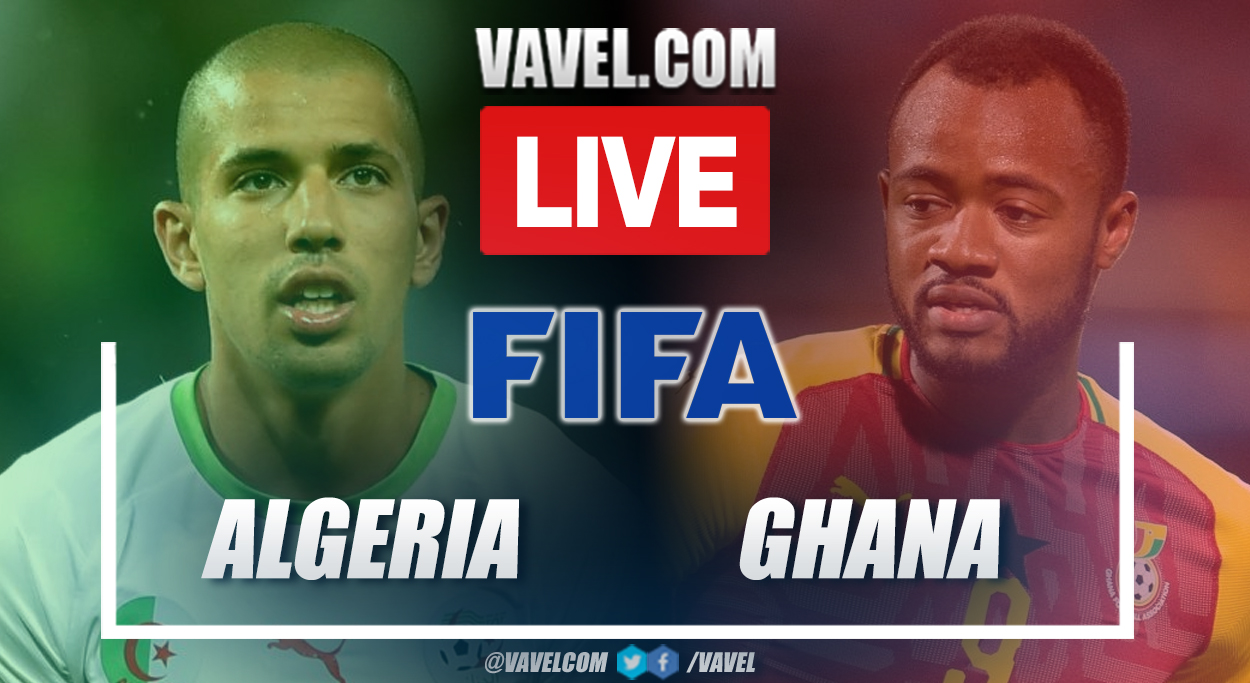 End of the match at Qatar Foundation Stadium, victory for Algeria! The Arab champions were convincing to claim victory in this friendly match.

One more minute will be played in the game.

Islam Slimane! Farid Boulaya sent in a cross from the right, goalkeeper Ati-Zigi couldn’t control it and the Algerian striker pushed the ball in for the third goal.

Jonathan Mensah’s own goal. An opponent was overflowing on the right edge, who sent the cross under and in the impatience to clear it, put it in his own goal.

Benjamin Tetteh goes deep into the box and shoots through the goal, but the Algerian goalkeeper prevents the equalizer again.

55′ The score remains the same

Algeria continues to win, despite the momentum with which the Ghanaian team came out. It will be important for them to regain control of the game.

Shot from outside the penalty area by Thomas Partey and the Algerian goalkeeper prevents the equalizer from a fine save at the right post.

The second half begins

The last 45 minutes of the game are in progress.

The first half of the match ends. Algeria partially wins by the minimum gap against Ghana.

One more minute will be played in the first half.

The end of the first half is approaching. Algeria regained control of the ball and generated fouls near the surface.

Brahimi takes a free kick from the left, Baghdad Bounedjah anticipates and deflects the ball, but it goes just past the right post.

first 30 minutes of the game. The game has become a little more balanced, Ghana has moved up its lines and is starting to get closer to the opposing goal.

15′ First quarter of the match

The score remains the same with the minimum difference. Ghana holds the ball more and looks for spaces in the Algerian defense. There are a lot of fights for the ball in the middle of the field.

Algeria keep insisting on scoring another goal. Ghana try to take control of the ball, but their opponents press well in their own half.

Adam Ounas scored the game’s first goal after an individual play in the right side of the box, he reached for his left foot to shoot at the near post and goalkeeper Nurudeen couldn’t control the shot.

For now, the teams are not hurting each other. Algeria is the team that came closest to the opposing goal, although they failed to score.

The match between Algeria and Ghana is launched.

Players from Algeria and Ghana take the field.

The preparation of Algerians

Happy to see you again!

We are now ready to bring you the action of this match between Algeria and Ghana.

In a few moments, we will share with you the starting line-ups for the Algeria vs Ghana live match, as well as the latest information from the Qatar Foundation Stadium. Don’t miss a detail of live match updates and commentary from VAVEL coverage.

How to Watch Algeria vs Ghana Live on TV and Online?

What time is the Algeria-Ghana match for the friendly match?

The presence of Jordan Ayew stands out in the Ghana team. The 30-year-old is one of the stars of his national team and the main player responsible for generating attacking play.

In the Algerian team, the presence of Sofiane Feghouli stands. The 32-year-old is one of the star players and with his experience he hopes to continue contributing to achieve more achievements at national team level.

It has been a long time since Ghana had an outstanding appearance at any of the official tournaments and they will be looking for another appearance in the Africa Cup of Nations. This match will serve as a good indicator of the level with which they will arrive at the debut in this competition.

The winners of the recent FIFA Arab Cup come into this match with the idea of ​​making final adjustments ahead of their Africa Cup of Nations debut. The Algerians are about to attempt to fetch another trophy for their trophy cabinet.

The match will be played at Qatar Foundation Stadium

Welcome to VAVEL.com’s coverage of the friendly match: live updates from Algeria vs Ghana!

My name is Jhonatan Martinez and I will be your host for this game. We’ll bring you pre-game analysis, score updates and live news right here on VAVEL.