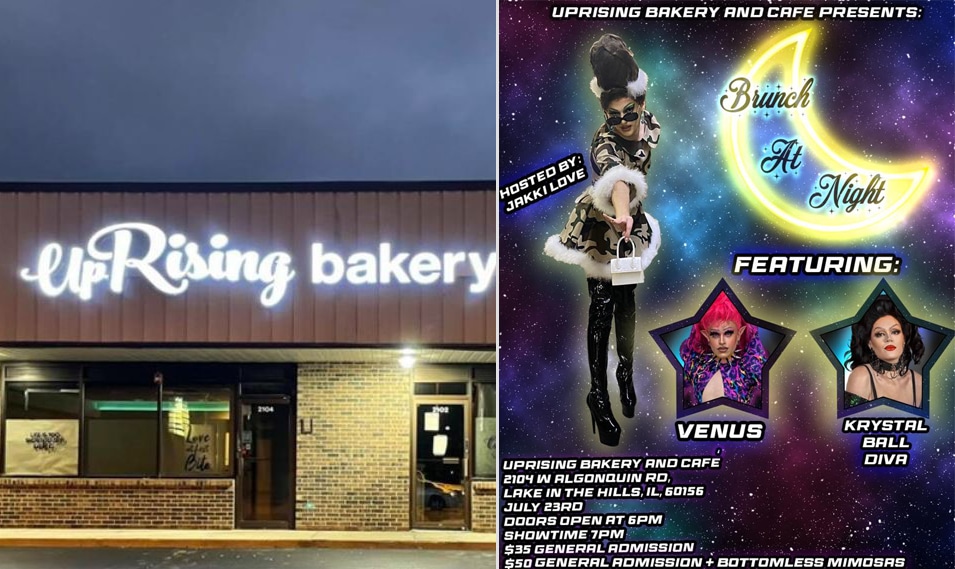 Police say a suspect is in custody after the UpRising Bakery and Cafe in Lake in the Hills vandalized, forcing the owner to cancel its child-friendly drag show scheduled for Saturday night.

In a statement early Saturday morning, the company said on social media that it had canceled its events for the weekend and would be closed on Saturday “for the safety of artists, staff and the community.”

“At this time we are asking everyone: DO NOT COME TO OUR LOCATION AT ALL TODAY. We didn’t want to back down from Bullies but absolutely cannot, in good conscience, continue with plans for tomorrow. It breaks our hearts. We will update when we can,” the owner said.

A suspect or suspects smashed the windows of the business and spray-painted slurs on the walls, ABC7 News reported. No one was hurt.

The Lake in the Hills Police Department said it has arrested a suspect and will release more information soon.

The police department said earlier this week that it began receiving messages on July 6 from concerned citizens about a drag show hosted by the company, located at 2104 West Algonquin Road, scheduled for July 23.

Police said residents had expressed concerns due to children being allowed to attend the event.

According to the event’s website, children of all ages were welcome and children’s tickets were discounted.

The police department and the Lake in the Hills Community Development Department contacted the owner of the business and “communicated regularly about the event.”

Police say no municipal code violations for the Village of Lake in the Hills were found and that no nudity or sexually explicit content is part of the planned performance.

The owner of UpRising Bakery and Cafe said he received threats in person and online after news broke of the controversial event.

In one instance, a bag of feces was left outside near the employee door and a threatening note was left on the door, according to police reports.

The police department said protests and counter-protests were planned for Saturday.

“The department will take a zero-tolerance approach to individuals who choose to attend with plans to engage in violence or criminal activity,” the statement added.

Corinna Sac, the owner of the company, said in an interview with WGN that she was overwhelmed by hate and negativity.

“I just want people to understand that we’re not targeting kids,” Sac said during the interview.