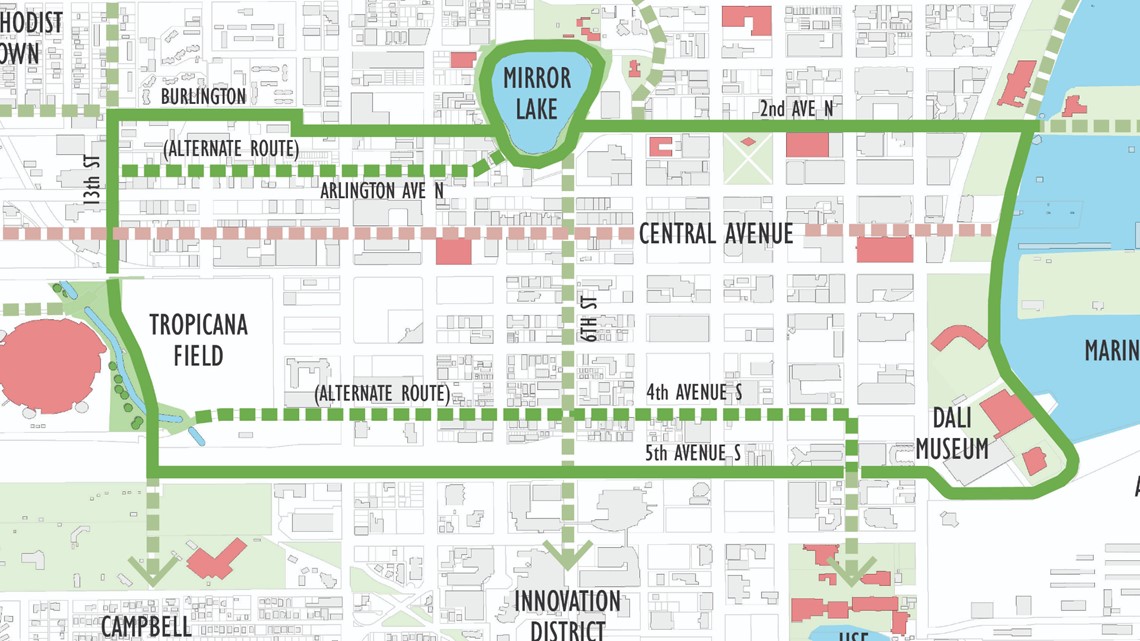 The “Straza” would cover a linear area of ​​three miles to connect major attractions.

ST. PETERSBURG, Fla. — The past year has been deadly for pedestrians and cyclists in Pinellas County. The number of fatalities nearly doubled in 2020. This statistic has some people wondering what can be done to make things safer for pedestrians, especially in busy city centers, like St. Petersburg.

It would be called “Straza”, a combination of a street and a square.

The folks at Car-Free St. Pete know this great idea would take many years to come to fruition, but they really want to get the ball rolling now.

The “Straza” would encompass a three-mile linear loop connecting all of downtown St. Pete’s major attractions and everything within would be mostly car-free. This would essentially open up existing streets to people who walk, bike, rollerblade or even scooter, giving them a safe way to enjoy all that downtown St. Pete has to offer.

“In areas where there are residential areas and areas where parking lots are already built, we will probably only allow local traffic so that people can still access these things without having to change the physical landscape. But in other areas, we could make them completely car-free. I think it’s just based on the feasibility study that we hope to do in the next few years,” she said.

You may remember when Car-Free St. Pete held Halloween on Central, closing 22 blocks of this busy street to cars. Thousands of people turned out for the event and gave great feedback about being able to enjoy so many of these restaurants and businesses without having to worry about passing cars.

For now, it’s just an idea.

Roberts says the group is in talks with St. Pete City Council to get a feasibility study on the project to see what would work and what wouldn’t, so we’re still years away from some form of this “Straza” becoming a reality.

In 2022, here are the ten best eco-friendly gifts