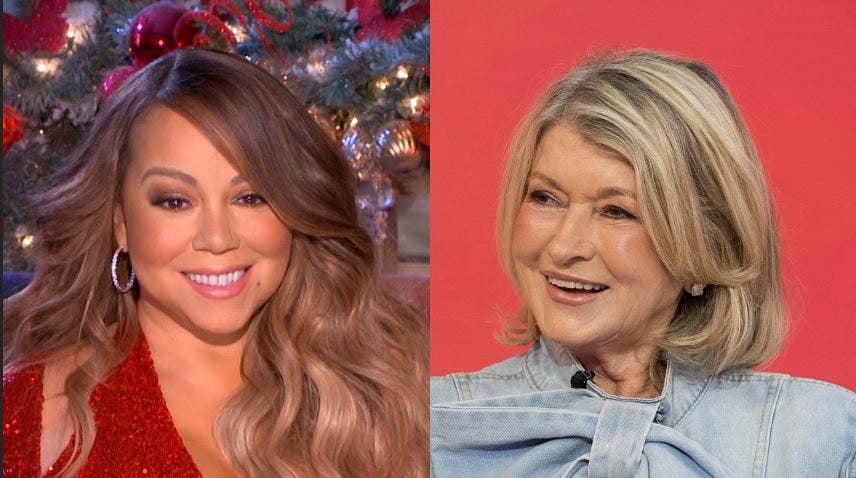 Mariah Carey and Martha Stewart Have a Friendly Feud to Celebrate Christmas Early: ‘I Can’t Give Up Thanksgiving’

Mariah Carey and Martha Stewart have been caught up in the age-old battle of when it’s too early to celebrate Christmas last week.

“Mariah, you know me. I’m a traditionalist with a twist,” Stewart said during an interview on the “Today” show this week, speaking to the “Christmas Queen.”

MARIAH CAREY, DUBBED THE “QUEEN OF CHRISTMAS BY FANS”, OFFICIALLY ANNOUNCES THAT CHRISTMAS IS HERE

Mariah Carey, left, and Martha Stewart had a (friendly) fight last week when it was too early to start Christmas celebrations.
(NBC/NBCU Photo Bank via Getty Images/Nathan Congleton/NBC via Getty Images)

The home and garden maven’s tsk-tsking came after Carey posted a short video to her social media on Nov. 1, which showed her first as a cackling Halloween witch before quickly transforming into a a diva wearing a Santa costume and riding reindeer, belting “It’s time!” against the background of his mega hit “All I Want for Christmas is You”.

The “We Belong Together” singer responded to the “Martha Stewart Living” founder on Nov. 3, tweeting, “Dear Martha!! I’ll NEVER give up on Thanksgiving!! But we can still start getting into it. festive mood now!”

She then invited Stewart to her home for the holiday honoring the Pilgrims and suggested an invite to Martha’s infamous Thanksgiving festivities.

“PS, I would love to have you at my Thanksgiving dinner even though I haven’t been invited to your Thanksgiving extravaganza yet! And THAT IS MAJOR! Especially if Snoop is coming!” Carey added, mentioning Stewart’s rapper friend Snoop Dogg.

Stewart has yet to respond to either of Carey’s overtures.

Last year, Stewart wrote in her blog that she entertained 16 guests at an 18-foot dining table with a plethora of fall comfort foods at her upstate New York farm. In the past, she said she had invited up to 40 guests to her home for Turkey Day.