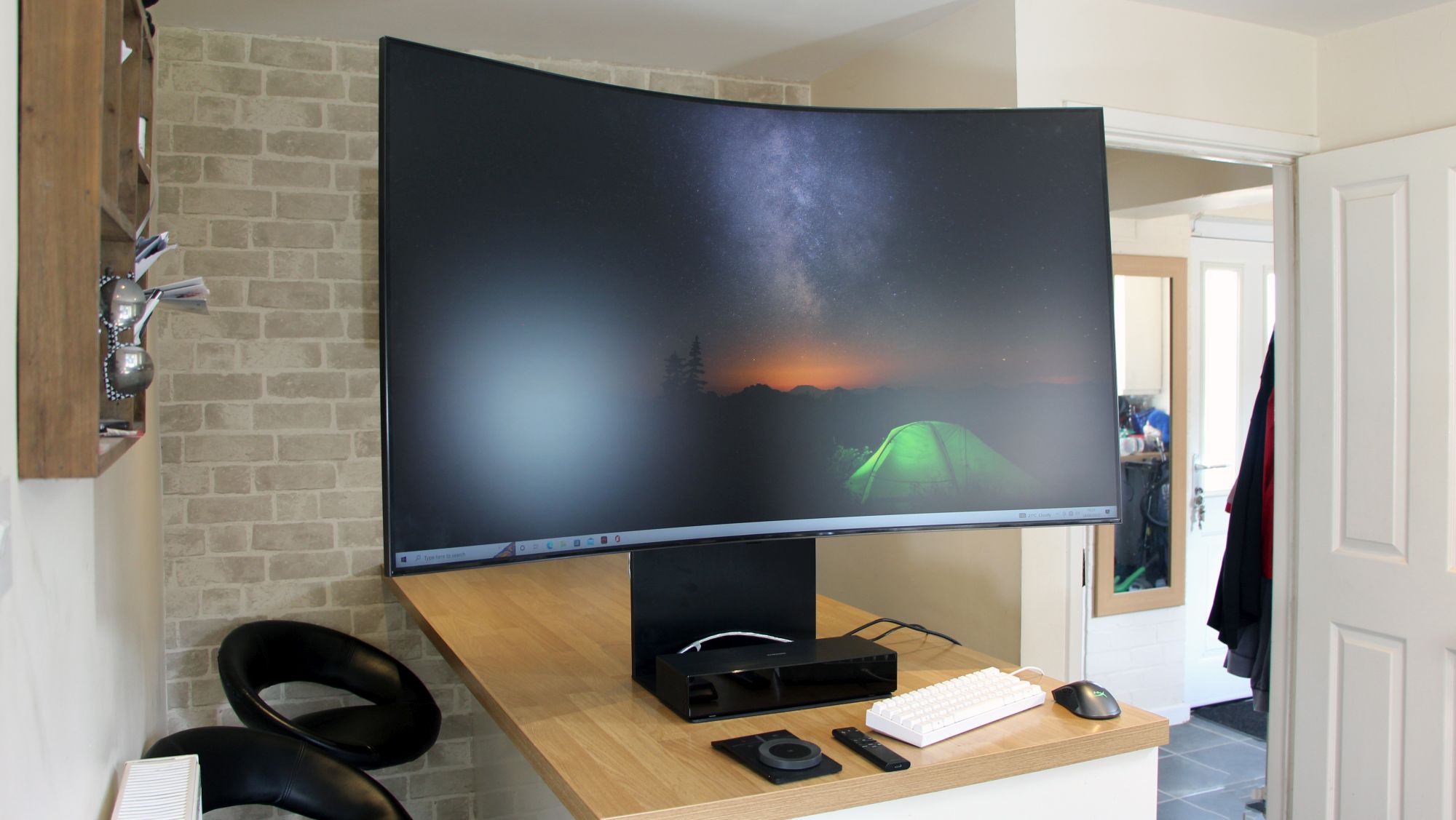 The Samsung Odyssey Ark is one of the most outrageous gaming monitors ever made. Do you think we are exaggerating? Just look at the specs: it’s a 55-inch curved beast with stunning HDR and 4K resolution.

It’s the kind of display that can make every game look amazing, and Samsung isn’t stopping there: the Ark also has plenty of smart TV features, so the company believes it can find a home in your living room.

At £2599, however, you’ll need deep pockets to invest in the Ark. And when you can get a great gaming monitor or flagship TV for that money, can the Odyssey offer the best of both?

Design and Features: Ahead of the Curve

The Ark’s 55-inch diagonal is instantly immersive, but also intimidating. Sit too close and you’ll hurt your neck trying to see corners. Instead, the Ark works best if you’re leaning back in a gaming chair with a keyboard and mouse or if you’re on the couch.

When you have the right position, the size, 4K resolution and 1000R curve deliver an amazing and immersive experience. The radius of this curve is also important: it matches the shape of the human eye, which means better viewing angles.

The Ark’s 16:9 aspect ratio is suitable for most games, especially large single-player titles. But Samsung has you covered if you want a different size or shape too: you can reconfigure the panel to 21:9 or 32:9 resolutions if you prefer a wider view in racing games. You can also shrink the screen and adjust its position, which is handy if you want something more compact.

The versatility does not stop. Samsung’s Multi View mode divides the display into multiple windows. When the Ark is horizontal, you get four 1080p tiles, and in Vertical Cockpit mode, you can deploy three windows. You’re in luck if you want to game, watch streams, or use instant messaging tools simultaneously.

It’s impressive, but not foolproof. When used vertically, your three windows only run at 1280 x 720, which makes games blurry. They only operate at 120Hz in this mode as well. And while you can mirror your PC, YouTube app, web browser, and smartphone or laptop screen in Multi View, most apps aren’t supported and you can only deploy only one HDMI input. Multi View is useful, but right now you certainly can’t throw anything into its three or four windows.

Fortunately, Samsung’s software situation is improving. On the Smart TV side, the Ark supports all the apps you’ll need, it includes game streaming from Xbox, Nvidia and Stadia, and it runs on the familiar Tizen software. The Ark comes with a conventional remote control and the solar-powered Ark Dial, which uses a large dial for quick settings. On-screen menus are responsive. Built-in Bluetooth support also means easy connectivity for your controllers.

While there’s a lot to like about Quantum Mini LED, proper OLED is always better. If you prioritize image quality over refresh rate and curve, top TVs like the Sony XR-55A95K and Philips 65OLED+936 offer true OLED technology in sleeker designs for the same price as the Ark .

The Samsung may not have OLED, but its 165Hz refresh rate tops those TVs. It’s superb for single-player games and works well with casual esports games, so you’ll only want something faster if you’re really serious about esports. Also make sure you have a compatible graphics card: you’ll need something like an Nvidia GeForce RTX 3080 Ti to get the most out of the display.

Samsung packs this technology into a display that weighs a monster 41.5kg. The Ark’s weight means setup is a two-person job, and at 1175mm wide and 379mm deep, you’ll need a large desk or TV cabinet to support this unit. Unfortunately, the Ark’s huge stand and visible bezels mean it looks worse than most flagship TVs, and it has RGB LEDs on the rear – but they’re neither bright nor impressive.

At least excellent tuning options justify the size of the Ark. There’s a powerful 270mm of height adjustment in addition to tilt movement and VESA support – that’s more than most TVs. Besides that, its Vertical Cockpit mode dominates the users and provides amazing experience in shooting games.

You don’t have to worry about cables on the back either: Samsung’s One Connect box is making its way from the TV range. You can plug your devices into four expandable HDMI 2.1 ports and use a single cable to connect to the display. It has wired and wireless internet alongside USB ports, though neither are fast.

Once you and a friend put together Samsung’s monster monitor, you’ll be blown away by its quality. The Quantum Mini LEDs deliver an inky black point of 0.02 nits and in SDR mode the display achieves a brightness level of 742 nits. Contrast sits at a stunning 4,500:1, and the Ark’s brightness and contrast top out at 1,226 nits and 61,300:1 in HDR mode. These top-notch results mean games look bold, deep, and nuanced.

Samsung’s screen also does a great job with colors. The 2.29 Delta E is rock solid, and the panel rendered the full sRGB gamut and nearly the full DCI-P3 space, so it can easily render SDR and HDR games.

Every game, movie, and TV show looks brilliant on the Ark. That’s top performance when it comes to gaming monitors. But if you’re really quality-conscious, you’ll still get better SDR and HDR performance from a high-end OLED TV.

The Ark’s 165Hz refresh rate makes single-player games and mainstream esports titles smooth, and it goes beyond the 120Hz and 144Hz offered by most top TVs. If you want to play competitive games, a 240Hz or 360Hz screen is best.

It’s a similar situation with response time: Samsung claims 1ms, but the Ark doesn’t quite hit that number in testing. You won’t notice any lag in mainstream games, but you’ll want another screen to trouble the top of the leaderboards.

The games look fantastic on the Ark. They sound good too: on the back you’ll find four speakers and two woofers that produce 60W of power. They sound great, with huge bass, crisp high end and detailed midrange, and the Ark excels at directional sound. Flagship TVs are still better, but the Ark’s sound easily surpasses any gaming monitor.

Samsung’s large screen offers a stunning experience. Its size, curve and resolution combine for unrivaled levels of immersion, and its image quality is excellent. There’s no doubt that the Ark outperforms virtually any other gaming monitor, unless you want a specialized screen for racing or esports.

Elsewhere, however, it’s a bit of a mixed bag. Positively, it has great smart TV features, intuitive controls, plenty of physical adjustment options and a smooth 165Hz refresh rate. The Ark’s connectivity could both be improved, and that screen is huge, heavy and expensive.

The Samsung Odyssey Ark doesn’t do it all, but it does offer excellent image quality, a bold and absorbing form factor and a healthy range of features – so it does a great job of blurring the lines between monitors and TVs. If you want a screen for PC gaming, console gaming and watching media, the Ark does a terrific job – just be aware of its flaws and price before parting with the cash.