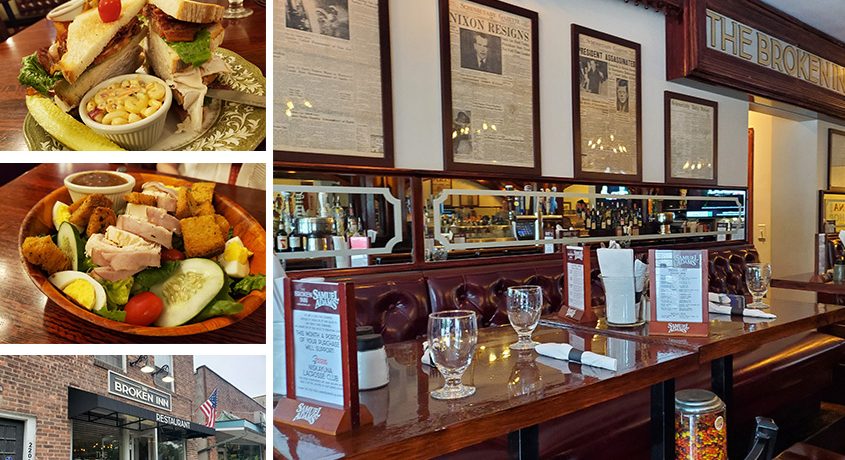 NISKAYUNA – Grab a sandwich with a side of snark at the Broken Inn, located in a small brick mall on Nott Street near the Niskayuna Co-op.

The Broken Inn’s neighbors, past and present, in the mall are represented by quirky signage decorating the restaurant: pharmacy, hair salon, that sort of thing. It helps the restaurant, which opened last March, feel like part of the neighborhood.

Most of the furniture, all of which has an interesting provenance, came from elsewhere: the cabins, the long bar, the tall candy tables.

What is a candy table? It incorporates a commercial candy machine into the metal hardware under the table. A little at your feet. The vending machines all seem filled with Reese’s Pieces.

The menu is placemat sized and laminated, and could double in a heartbeat. It’s all printed on one side, including the owner’s comments, and he has a lot to say.

Choose from four salads: Chef and Buffalo Chicken ($15 each), Caesar and Greek ($12 each). There are five sandwiches including a French dip ($16) and Blatnick’s roast beef ($16), named after Olympic gold medalist Niskayuna.

On the weekends, they serve brunch-type fare, like Eggs Benedict, and open at 10 a.m.

The Broken Inn does things its own way. For example, he only takes cash. Don’t panic: there’s an ATM on site, and it only charges a dollar.

Instead of letting credit card companies save 3% on each tab, the restaurant sends the same amount to support worthy local causes. The groups change every month.

You can easily split a giant sandwich, but it will cost you. There is a $20 penalty for a shared plate because, as the menu states, “shared plate charge is zero” and waiters end up earning half that. The $20 goes to the Niskayuna cause of the month.

According to another area newspaper’s “Table Hopping” blog, all those oddities come from Tommy Nicchi, whose father opened the Comedy Works, now located in Saratoga Springs, and the long-closed Deli Works on Central Avenue in Albany. There are links to Gershon’s delicatessen, which explains the focus on sandwiches.

Nicchi is a busy guy, with another Comedy Works in Las Vegas, and he runs the parent company of both. He is also saving talent for a club in Hawaii.
There was a refusal from the neighbors, who did not want a bar nearby. So the Broken Inn (named after girls Brooklyn and Kennedy) doesn’t keep late hours and asks you not to park on neighbors’ lawns.

I arrived before Patrice, got a comfortable, padded cabin with a view of the bar and dining room, and realized I had no money. Ouch! Then I remembered the ATM in the dining room near the ice cream display.

Pink Floyd was playing, not too loud. Husband Eric would approve of the classic rock soundtrack.

You enter from the Clifton Park Road side of the shopping center into the dining room, or from the front, which is the bar. Floor-to-ceiling windows offset the dark wood, and repurposed fixtures look original to the building.

We started with a plate of sweet corn nuggets ($10), the special starter of the day. The walnut-sized fried snacks are lightly sweet on the outside, with a thick, savory crust that gives way to a soft, creamy center studded with whole corn kernels.

Next to it was a cup of creamy horseradish flavored dip. The nuggets were topped with shredded cheese which seemed like a random choice.
They are addictive and we tried not to eat them all. “Pure junk food,” Patrice said approvingly.

Patrice had a chef’s salad with balsamic on the side. I noted the freshness and high quality of the Romaine. She liked meat and cheese rolled together and sliced. It was perfectly arranged: the egg was quartered exactly, the sliced ​​tomato and cucumber placed precisely.

Broken Inn fries in peanut oil, which adds extra flavor to any food. Patrice held out a crouton the size of a matchbook. It tasted like it had been rubbed with fresh garlic and then fried. Delicious.

The Broken Inn’s Turkey Club ($16) is made with four slices of bread and tops the fresh pickle and cup of macaroni salad. Thinly sliced ​​turkey spilled onto the plate leaving much more behind.

There was an abundance of bacon in two of the layers, and I happily nibbled on the salty bits, still chewy and not crispy around the edges.

I removed two of the slices of bread, which left a wonky sandwich but gave me a chance to assess the tomato (ripe, thinly sliced) and Romaine (perfect little leaf).

The bread comes from the Perreca bakery in Schenectady, which explains the excellent soft crust and firm crumb.

As much as possible, I tried to hold on, and it was really a treat. I enjoyed all the toppings and went through the reduced half.

The side of fries ($3 extra) was a delight, with thick sliced ​​potatoes and just right – old fashioned fries that need no seasoning except salt.

The server mostly left us alone to talk but was there when we needed something. At that time, the place was busy and it was difficult for me to hear him.

We split an order of soft serve ice cream ($5), foregoing chocolate lasagna ($8) and other desserts. It was served in a tall glass with rainbow sprinkles. I survived Patrice and continued to work long after she put her spoon down. The strong vanilla note kept me on my toes.

Cones or cups are $5 each. There is chocolate and vanilla. The ice cream shop window, on the Clifton Park Road side of the building, is open to walk-in customers.

Plus it’s owned by locals with nice local kids working there. And when you forget to bring cash, there is an ATM.

Caroline Lee is a freelance writer living in Troy. Join her at [email protected].

MORE INFO: Children’s menu. Parking in front of the lot and across the street in the large lot. Cash only. ADA compliant. Take-out not available at this time.

More from The Daily Gazette:

Gmail is making the recipient field much friendlier to use, long after it promised to do so

Are you over 50 and looking for a job? Here’s what to know about age and work