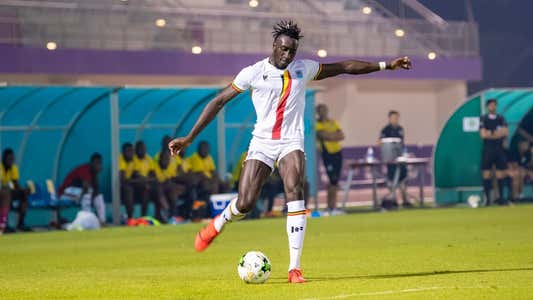 Ugandan defender Bevis Mugabi has confessed he was unaware he broke Cristiano Ronaldo’s famous 8ft 5in jump record while playing for Motherwell.

The 26-year-old jumped an inch higher – 8ft 6in off the ground – to score in the Scottish Premiership clash at Ross County in 2021 to break Ronaldo’s record of 8ft 5in then that he was playing for Juventus against Sampdoria in the 2019 season.

“Honestly, I had no idea I had done it until the end of the game when my brother called me and said I had jumped high, but then I didn’t really focus on that because my goal was to get three points for the team,” Mugabi said, according to Fufa official website.

“I’m happy it was the winning goal and I got the vital points we needed at the time.”

Mugabi, who is currently with the Cranes for the FIFA international break, has further revealed his decision to extend his contract with Motherwell.

“I decided to stay with the club because of the loyalty they showed me when I arrived in Scotland,” Mugabi continued. “First and foremost they believed in my abilities even when I wasn’t playing well and that’s probably why I decided to stay and develop more as a player and a person.

“But the most important thing was to play games consistently. I think I made the right decision to stay at the club.

On his transfer from Yeovil to Motherwell in 2019, Mugabi said: “It was a big change moving from England to Scotland. I left my family behind but I had to grow as a person, adapt to a different environment, culture, people and style of play.

“It wasn’t a very easy transition but I’m glad I took this step with the aim of trying something different and I can’t complain.”

Mugabi, who is 1.88m tall when he lines up in defence, has picked Liverpool’s Sadio Mane as the toughest player he has ever faced.

“Senegalese Sadio Mane at the 2019 Afcon tournament in Egypt when we lost 1-0 in the round of 16,” Mugabi said.

He was first called up by Ugandan coach Sebastien Desabre in 2018 and played two international friendlies against Malawi and Sao Tome and Principe at Namboole Stadium.

Uganda are preparing to face Uzbekistan in a friendly match at Markaziy Stadion on Tuesday.

When and where to watch online, telecast, team news